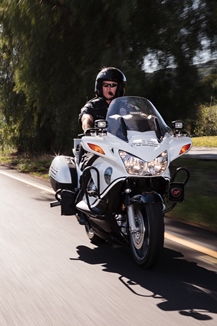 Our traffic bureau volunteers are tasked with assisting at traffic collisions, tagging, citing and removing abandoned vehicles, citing disabled parking violators, and placement of two RADAR equipped speed detection trailers. These trailers provide instant feedback to drivers who pass them and remind drivers of posted speed limits. They are placed in certain locations throughout the city based on traffic collision data and citizen requests. The bureau works a wide range of hours, concentrating their efforts during peak driving times.

Officers who request to ride a police motorcycle apply for the position and are selected through a testing process. Safety is the top priority. Once selected, officers go through a rigorous four week independent training program designed to teach them enforcement riding skills. Generally, only 50% of officers who go to the training are able to complete motor school and become motor officers.

Society has seen a large increase in the abuse and addiction of prescribed narcotics, marijuana and other illegal narcotics. Hemet PD Officers have received specialized training Advanced Roadside Impaired Driving Enforcement (ARIDE) in order to combat against persons driving under the influence of narcotics, including prescribed medications and marijuana. Training was paid for through a grant from the Office of Traffic Safety (OTS). 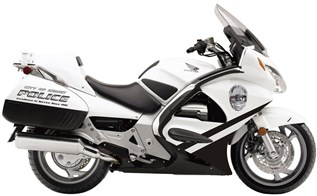 California 2009 Mileage Death Rate (MDR) – fatalities per 100 million miles traveled is 0.95, and marks the first time California has been below 1.0. California is much better than the national 1.14 MDR.

During 2011 in Hemet there were 2068 traffic citations issued and 259 arrests for DUI related crimes. Officers investigated 391 traffic collisions, with a total of 397 persons injured and 8 fatalities; 58 of the collisions were a result of DUI's causing injuries to 45 persons and 1 fatality.

Alcohol-impaired driving fatalities (fatalities in crashes involving a driver or motorcycle rider (operator) with a blood alcohol concentration (BAC) of 0.08 grams per deciliter (g/dL) or greater) dropped by 14.4 percent from 924 in 2009 to 791 in 2010. The 2010 figure is the lowest DUI death total ever.

California's alcohol-impaired driving fatality rate dropped from 0.31 in 2008 to 0.28 in 2009. California's rate is much better than the national average of 0.36. Of the five largest states in terms of total traffic fatalities, (CA, FL, TX, PA, and NC), California has the best rate.

As a percent of total fatalities, alcohol-impaired fatalities decreased from 30 percent in 2009 to 29 percent in 2010. This number has remained virtually unchanged in the past five years. California is better than the national average of 31 percent.

California's first observational survey of cell phone use by drivers showed that drivers are talking and texting at a combined rate of at least 9 percent at any given time.

In 2009, 1,458 California drivers were killed in crashes, of whom 1,173 were tested for drugs after death. The federal government reports that 339 tested positive for "drug involvement", or 23 percent of all drivers.

The first-ever "National Roadside Survey of Alcohol and Drug Use by Drivers", conducted by NHTSA, found that 16.3 percent of nighttime drivers were drug-positive, with marijuana (THC) at (8.6 percent) being the most commonly detected drug.

In fall 2010, six cities in California (Anaheim, Bakersfield, Eureka, Fresno, San Rafael, and Torrance) conducted nighttime weekend "voluntary" roadside surveys primarily to gather data on marijuana use among nighttime drivers. The results were that 8.4 percent of the drivers providing oral fluid were positive for marijuana and 7.6 percent of the breath tested drivers tested positive for some amount of alcohol.

In California, the percent of restrained passenger vehicle occupant fatalities (all seat positions) increased from 60 percent in 2009 to 67 percent in 2010. California is much better than the national average of 46 percent and no state is better than California. NHTSA estimates that about half or 241 of the 483 known unrestrained fatalities would be alive today had they simply buckled up.

In 2010, the percent of unrestrained passenger vehicle occupant "teenaged" fatalities was 41 percent. Of the five largest states in terms of total traffic fatalities, (CA, FL, TX, PA, and NC), California has the best rate. Since restraints are about 50 percent effective in preventing a fatality, NHTSA estimates that half or 25 of the 50 teens would be alive today had they simply buckled up.

The percentage of motorcycle operators killed with a Blood Alcohol Content (BAC) of 0.08 or greater increased from 23 percent in 2009 to 27 percent in 2010.

The percentage of motorcycle operators killed that were improperly licensed increased from 32 percent in 2009 to 33 percent in 2010.