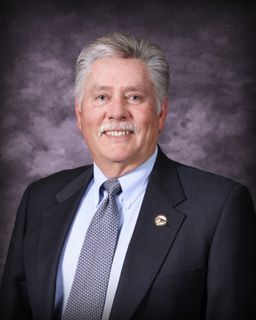 Russ is a native-born Texan, but he has lived in California most of his life. He spent four years in the United States Air Force and is a Vietnam veteran. His formal education includes an Associate's degree in Administration of Justice from Chaffey College and a Bachelor's degree in Management from the University of Redlands. Russ has a history of volunteer community involvement through PTA, youth sports, Kiwanis, Red Cross and Veterans organizations.

After moving to Hemet in 2006, Russ transferred his American Legion and VFW memberships to local American Legion Post 53 and VFW Post 2266. Public service has been a priority most of his life. After military service, he began his law enforcement career as a Police Dispatcher and ultimately concluded his 30+ year career as a Captain with the Claremont Police Department. Russ served as a Disaster Services Volunteer with the American Red Cross and has deployed on several National disasters. Soon after moving to Hemet, Russ became actively involved in his community HOA, and has served on various committees and his HOA Board of Directors for the past 12 years.

Public safety is one of Russ's highest priorities, and he recognizes its significance on Hemet's economic vitality. He staunchly advocated for passage of Measure U which was critically needed to help restore and enhance our Police and Fire Departments. In fact, it was the successful passing of this measure and the subsequent emphasis on public safety that motivated Russ to seek appointment to a vacant City Council seat in February of 2017. He retained his seat on Council after being duly elected in November of 2018.

"Admittedly, there are many challenges facing Hemet today, but we are blessed with an abundance of dedicated Hemet residents and business owners who are committed to seeing Hemet revitalized."

With his background of municipal government experience and passion for community service, Russ looks forward to collaborating in these endeavors through public and private partnerships that are crucial to Hemet's future.