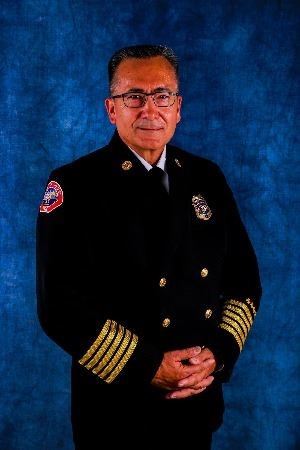 Chief Scott Brown was selected as Interim Fire Chief for the City of Hemet Fire Department on December 3, 2014 and appointed as the City’s permanent Fire Chief on April 15, 2015 after competing in a Nationwide recruitment for the position. Chief Brown has extensive Fire Service experience, previously having been with the Orange County Fire Authority for 35 years. He started his career with the California Department of Forestry and also worked for the Orange County Fire Department before the Orange County Fire Authority (OCFA) was formed in 1995. Chief Brown has previously served as a Firefighter, Firefighter/Paramedic, Fire Captain and Battalion Chief assigned to a wide variety of assignments in field Operations and Staff before his appointment to Division Chief.

As a Battalion Chief for 13 years with OCFA, Chief Brown held executive staff level positions as Emergency Medical Services Chief, Task Force Leader for California Urban Search and Rescue program under FEMA. Chief Brown was deployed to assist in the Oklahoma City Bombing incident and Hurricane Katrina disaster response where he served as a medical specialist and as a Task Force Leader.

Chief Brown has held a wide variety of high-level assignments which included managing all media and community relations on behalf of the Fire Authority, liaison to political constituencies such as local city councils and other elected officials on behalf of the OCFA Executive Management Team.  As a Division Chief other responsibility included overseeing all Fire/ EMS related services for the City of Santa Ana, directing day-to-day operations of 10 fire stations as the Fire Chief and part of the Cities Executive Management Team.

Throughout his career, Chief Brown has also been instrumental in the development of community coalitions to enhance citizen participation on a wide variety of community-based risk reduction efforts, establishing the Community Emergency Preparedness Academy, an effort that places emphasis on individual emergency preparedness. Chief Brown’s community involvement also includes service as a Reserve Police Officer for both the City of Irvine and San Clemente Police Departments.